Before we discuss DINAA in detail, first we need to provide some context. The United States has enacted a variety of laws and policies that govern access to public records and the historical and cultural heritage of our Nation. The National Historic Preservation Act of 1966, which begins with “The preservation of our heritage is in the public interest… as a living part of our community life, in order to give a sense of orientation to the American people,” represents one of the key pieces of legislation protecting archaeological and historical heritage in the US.

The National Historical Preservation Act led to a number of administrative processes and offices that regulate how federal actions, especially in regard to construction and other development, impact historical and archaeological sites. Many of these processes work at the level of state governments through State Historic Preservation Offices (SHPOs) and through intergovernmental consultation withTribal Historic Preservation Offices (THPOs). Conservatively, the public invests over $500 million per year to comply with historical and archaeological protection measures required by federal law (Altschul and Patterson 2010). This level of public investment nearly matches the total combined budgets of the IMLS (roughly $240 million in 2015), the NEH (roughly $140 million in 2015), and the NEA (roughly $150 million in 2015), all now threatened with total elimination. These surprising numbers demonstrate archaeology’s relative importance in public cultural heritage investments.

Unfortunately, much of this work and investment goes largely unnoticed. Up to now, decades of investment in managing and protecting America’s archaeological heritage, have led to few publicly accessible impacts. Cultural resource management (CRM) largely takes place within relatively opaque bureaucratic processes that regulate construction and development. Some of the secrecy around information created by CRM work is motivated by threats of looting and vandalism, as well as cultural sensitivities related to some archaeological information, especially that with religious significance to modern Native American communities. But, more routinely, CRM work typically takes place via commercial contracts, and many of these contracts place rights restrictions on documentation. CRM work has resulted in an estimated 350,000 reports nationwide as of 2004 (NADB 2004), but because no instrument for cataloging or public access was ever mandated, irreplaceable cultural heritage documentation in these “grey literature” reports languishes, ignored and underappreciated.

As part of their “behind the scenes” administrative work, SHPOs create and manage inventories of archaeological and historical sites discovered and documented by research mandated by historic protection laws. These inventories reside in electronic databases of various types and formats. Because so many of this information is now digital, it is much more feasible to publicly share and make use of these data — data developed by many experts working for many years to amass.

DINAA, led by David G. Anderson, Joshua Wells, Stephen Yerka, and the Open Context team (Eric Kansa, Sarah Whitcher Kansa), works to aggregate, publish, and archive inventories of historical and archaeological sites. To do so, DINAA collaborates with state government officials and tribal nations across the United States to properly prepare the data (including redacting ownership, location, and culturally-sensitive information, for legal and ethical reasons) and make it accessible to a broad audience. This includes public map visualizations showing site distributions at roughly a 20 x 20 km spatial resolution, a scale excellent for regional and continental displays while still protecting site security. For the same reason, DINAA maintains no sensitive data online; we keep primary data files in offline, encrypted storage.

We have partnerships in place or in development with about two dozen states at present, and already have integrated information from half a million sites across much of the eastern United States. Public funding from the National Science Foundation (Grants 1623621, 1623644) and the Institute of Museum and Library Services (LG-70-16-0056-16) makes DINAA possible, and in the spirit of DINAA’s public support, anyone can access and use the entire DINAA dataset without any technical or intellectual property restrictions. Increasing numbers of state, tribal, and national professional and resource management groups and organizations endorse and support these efforts.

DINAA is hosted by Open Context, a data publishing platform referenced by both the National Science Foundation and the National Endowment for the Humanities for data management in archaeology. Open Context archives DINAA data with the University of California’s central digital repository and other partners internationally. DINAA brings these site file records together in order to link and index a wide range of reports, publications, museum collections and research databases. It makes accessible, for the first time, data from the millions of archaeological sites and tens of thousands of reports produced by archaeologists over the past two centuries, much of it in recent decades.

By making rich cultural data publicly available, DINAA’s activities help our nation realize the original intent behind historical protection laws. For a large fraction of the United States, DINAA now offers the closest we’ll probably ever come to a comprehensive “census” of America’s population history over the past 14,000+ years. This is inherently interesting and significant because it helps document historically-unique experiences and richly diverse cultural development of peoples in many different societies. By making the data public, visible, and usable (without IP or other restrictions), we can now explore new cross-disciplinary research questions about how people have interacted with their natural environment over vast regions and time horizons. This can give us important new insights into sustainability. Already, zoologists, biogeographers and other environmental researchers have started to integrate DINAA into their own information management systems.

At the same time, Native American THPO officials can gain better access to information about their ancestral territories. Many Native American nations we forcibly removed from their historic homelands, and these territories often span multiple modern state boundaries. Access to information from across these territories can help under-staffed and under-supported THPO offices protect and manage their historical and sacred landscapes, and facilitate government to government consultation.

Furthermore, these data can help publicly highlight threats to America’s cultural landscape. Our research has been documenting the potential impact of climate change and related coastal flooding, which threatens to destroy tens of thousands of archaeological sites, along with their present communities and habitats. In this respect, efforts for better digital preservation and access complement stewardship of the physical record of the past. Publicizing the scope and scale of these threats will be a critical element in building public support for conservation measures. 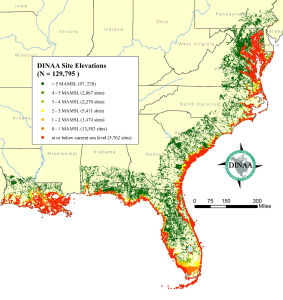 Finally, in working to make these data go public, DINAA raises new possibilities for wider community collaboration on the curation of these data. Can we create more culturally inclusive systems of information governance so that classification systems, understandings of cultural appropriateness, and accessibility protocols better meet the needs of Native American communities and tribal nations? How do we improve data quality and organization to better meet the needs of scientists? Can we use such data to protect the archaeological and historical past though more democratic and less bureaucratic mechanisms?

These questions highlight the integral role that public records, including cultural data, should play in forging a more equitable civil society.